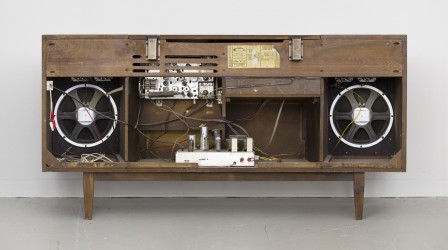 The annual Betty Bowen Award is now in its 33rd year and, as the application deadline nears, the Betty Bowen Committee is looking forward to awarding a cash prize to a visual artist living and working in Washington, Oregon, or Idaho. The application is available at callforentry.org and the deadline for submissions is August 1. Over the years, this award has had an impact for artists in our region, and it reflects the commitment Betty Bowen had in supporting the vision of contemporary artists in her time. We wanted to share some insights into the strength of this memorable advocate for the visual arts in our region.

Betty Bowen was an enthusiastic supporter of the arts community in the Pacific Northwest. She served as a publicist and then first assistant director of SAM under Director Richard Fuller until 1973. She also served as a founding member of: the Seattle Arts Commission, the Pacific Northwest Arts and Crafts Center, and the Allied Arts Historic Preservation Committee (where she also served as chair). She is best remembered as “the den mother of the city’s arts.” She befriended artists of the region, including Mark Tobey and Morris Graves and was known to stop by homes and studios with gifts of food and funds for struggling artists.

Bowen was born in Kent, Washington in 1918. She earned a degree in English from the University of Washington and worked as a journalist for The Seattle Times and the Seattle Star. She was instrumental in efforts to make Pike Place Market a historic site, as a member of the board of the Friends of the Market.  The year of her death in 1977, at the age of 58, she was declared a First Citizen of Seattle, an award given on behalf of the residents of Puget Sound area to sybmolize their appreciation to those who devote themselves to their community. Following her death, many people were determined to recognize her memory. The architect Victor Steinbrueck established the Betty Bowen Viewpoint at Marshall Park, a short walk from her home. Artists including Morris Graves, Margaret Tompkins, Guy Anderson, Kenneth Callahan, and Charles Stokes all contributed unsigned work to the site.

Following Bowen’s death, her friends decided to establish an award that would further her efforts to recognize and support Pacific Northwest artists. While it began as a relatively small award, the Betty Bowen Award has grown to be one of the largest awards of its kind on the west coast. Last year’s winner, Ellen Lesperance, was awarded $15,000, with runners-up Eli Hansen and Barbara Sternberger each receiving $2,500. The winner of the award has their work on display at the Seattle Art Museum for a full year, providing great exposure for the artist.

The 2008 Award winner, Isaac Layman, is now serving for a third year as a member of the Betty Bowen Committee. Two of his works, “Stereo”  and “Six Glasses” were recently brought into SAM’s Permanent Collection. His work is currently on view in The Digital Eye: Photographic Art in the Electronic Age at Seattle’s Henry Art Gallery and in Collecting for the Future: the Safeco Gift and New Acquisitions at the Tacoma Art Museum. His first solo museum exhibition will be at Seattle’s Frye Art Museum this fall, Isaac Layman – Paradise.

When asked for a comment for this post, Layman enthusiastically stated: “Artists! Apply for the Betty Bowen Award. Besides offering the chance of winning $15,000 and showing your work to a larger audience, the price of the application GUARANTEES you the undivided attention of the Betty Bowen committee. Show them your vacation pictures from Leavenworth or your 6 best slides of artwork. The Betty Bowen panel is your captive audience. Apply.”

The deadline is fast approaching! Submit your application online now at callforentry.org. Best of luck!