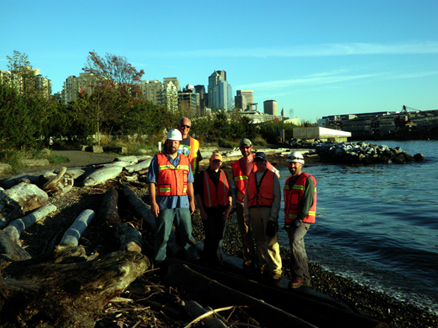 Here’s what the WA Dept of Natural Resources says about creosote in Puget Sound:

There are hundreds of thousands of derelict creosote pilings throughout Puget Sound, many of which have broken off and distributed tons of debris onto beaches. Creosote is a toxic chemical and a known carcinogen. Recent studies have shown that chemicals in treated wood materials can be harmful, and even lethal to many marine species. Herring eggs exposed to creosote have a high mortality rate, and English sole develop liver lesions when exposed to the chemicals.  Impacts on salmon health also have been observed in recent studies. These and other negatively affected species are an important part of the food chain for salmon, orca whales, and birds such as the western grebe. The health of Puget Sound is also intimately connected with the health of our economy.

Here you can see Bobby (fourth from the left) and some of the Puget Soundkeepers crew at the end of a hard day.  Thanks to Bobby and the rest of the crew for helping to make this happen. Puget Sound thanks you!