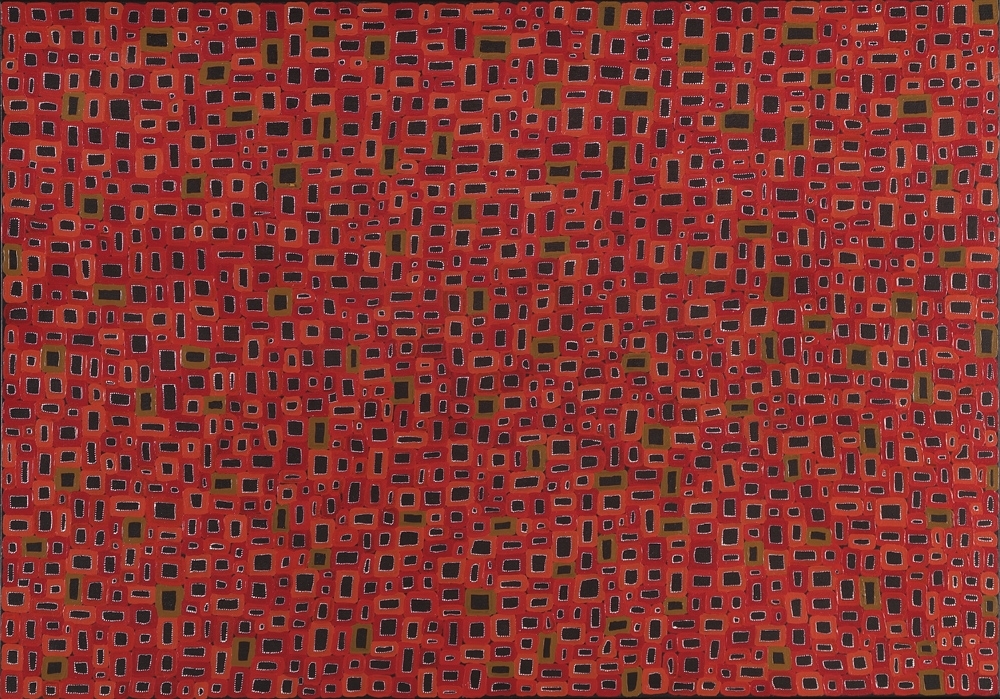 Every year, SAM hosts an event called the Acquisitions Evening, celebrating artworks that have recently come into our possession and thanking donors who have given art to the museum. We in the Communications Department are asked to create a special invitation for the event, usually showcasing one of the new acquisitions on the front of the card.

When we started discussing the invitation back in February, there was little question which artwork we wanted to spotlight. We fell in love with Awelye “Women’s Ceremony,” a 2006 Australian Aboriginal painting in brilliant reds and blacks, recently given to SAM by Robert Kaplan and Margaret Levi.

But choosing the art we like best is only the first step. Our Development Department has to agree that our design for the invitation will excite and inspire the people they’re inviting to the event. The museum curators have to approve of our choice, after considering whether we’re showing the art in a respectful, appropriate manner. And for the art to reproduce well on the invitation, we need professional, high-resolution photography of the art. Since these artworks have come to SAM within the past year, many are still on the waiting list to be photographed (there’s a months-long backup because the museum no longer has a photographer on staff).

The final step was making sure the artist agreed to our using her painting for this purpose. While SAM is now the owner of Awelye “Women’s Ceremony” as a physical work of art, artist Abie Loy still owns the copyright—which is the case with most modern and contemporary art. She (or her representatives) has the final say about when and how images of her art get reproduced.

Usually, we can obtain reproduction rights by making a phone call to Artists Rights Society (ARS), a New York organization that handles intellectual property rights for more than 50,000 artists around the world. Not this time. We were surprised to find out that ARS wasn’t handling the rights to this painting.

So we called Gallerie Australis, the gallery in Adelaide, South Australia, that sells Abie Loy’s work. The gallery’s director said he would need to discuss our request with the artist herself, and she was unavailable. Where is she? we asked. In the outback, he responded. Abie Loy lives at Iylenty (Mosquito Bore) near Utopia Station, 170 miles northeast of Alice Springs in the northern territory of Central Australia. When will she be back? we asked. Sometime soon, he replied.

It was now the end of February. We needed to send the invitations to the printer on March 16 to have them mailed in plenty of time for the event. We went ahead with the design process, fingers crossed. A week passed. No word. Another week. At three working days until our print deadline, we gave up on getting the rights to Awelye “Women’s Ceremony” and started working on a Plan B design. We had some good alternatives, but nothing that worked quite as well on the invitation as Abie Loy’s painting.

And, of course, that’s when we received an email from Australia saying that the artist had given her permission. Twenty-four hours later, the invitation went to the printer.

And we started talking about what art images to use on our next batch of invitations.