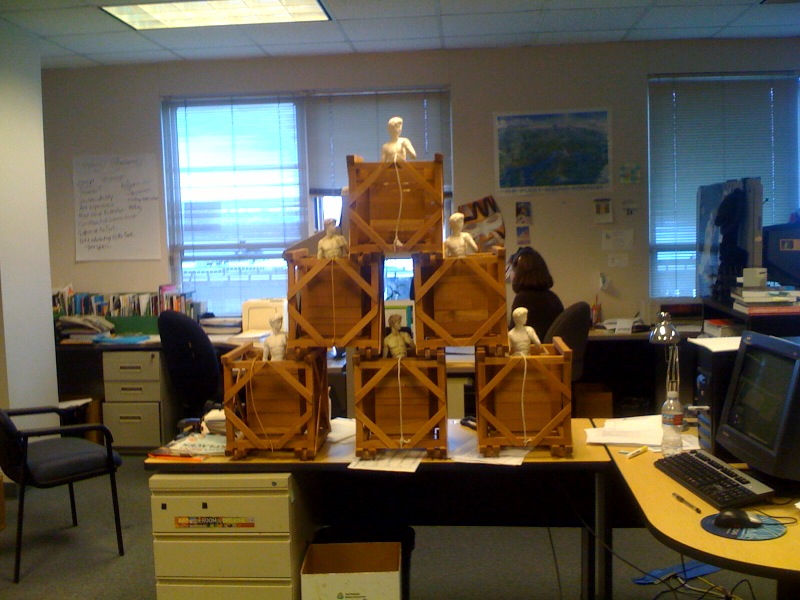 I recently found myself needing to purchase a dozen replica statues of Michelangelo’s David. Such is my job at SAM – I get to do the sometimes very random tasks associated with promoting the museum’s current exhibitions. This is the story of some amazing on-line merchants and mysteriously multiplying Davids.

Our plan was to replicate this very charming piece in the Michelangelo Public and Private exhibition –a 19th century model for moving the real David statue from one end of Florence to the other. Our goal was to make a dozen “Little Davids” to deploy around Seattle for people to find, take photos of, and upload to our website. The local company Museum Resource could re-create the crates, and I set about ordering Davids online – which was not nearly as easy as it might sound. Model of the Cart for the Transport of David, 1873, unknown artisan, wood and gesso, 5 x 5 x 34 in., Courtesy Fondazione Casa Buonarroti, Florence

First of all, as you might imagine, there is some crazy David stuff out there. David switch plates, David nightlights, David charm bracelets, and my personal fav – the silver plated David (he looks a little like a runner up for the Oscars). (Needless to say, searching for Michelangelo Davids on the web is not always a work-safe practice – search at your own risk.) Finding actual statue replicas that have not been changed into a myriad of other items is actually a bit of a challenge.

Eventually I narrowed down possibilities to a number of companies that appeared to sell the exact same David – he’s bonded stone (which I understand to be marble dust that’s been bonded together) and a plaster version, which seemed like it might be much less hearty in the great outdoors. I decided on the bonded stone version.

Thursday morning, I placed my order for a bakers dozen of Davids (a dozen to release and a back-up for the office, in case of any mishaps) with Your Museum Store. About 20 minutes after placing the order, I got a call from Your Museum Store owner, Sherry Mabry, located in San Antonio, Texas. Did I really intend to order 13 identical David statues? When I said yes, she relayed that her husband was currently jumping up and down on a golf course out of excitement – they are a Mom and Pop kind of company and this was a big order! I got all warm and fuzzy – I had my Davids and was happy to have supported a small business.

Friday, I came to work to a flashing light on my phone. The message was from Sherry – unfortunately, she’d discovered that their warehouse actually only had 6 Davids, and could I take another statue? Perhaps a Buddha? Or a David twice as tall? I gave her a call back – no, we really just need the shorter Davids. I told her to go ahead with the 6, and went on to the next vendor, Ancient Art Replicas. A few more dollars per David, but nothing that would break the bank. A quick on-line order placed, and we’re back up to a dozen Davids. I get on to my other work.

An hour later I get a call from Ancient Art Replicas, thanking me for my order. Unfortunately, they only have 5 out of the 7 Davids ordered. Will I accept that? Can they offer me any other replica statues? Now I’m annoyed – do I really need to split my order between three vendors? Apparently yes. I accept their 5 Davids, and go onto the A Boyd Company to order my final (or so I think) two statues. This is where the fun starts. Not 5 minutes later, I get a frantic call from Sherry in Texas – she tells me that I will not believe this, but somebody else has ordered 5 of my Davids! She thought she had held all of them in my name, but in a frantic rush she apparently held only one under my name! And now they’ve all been sold to…you guessed it… a company called Ancient Art Replicas. Now, whereas I thought I was back up to 13 Davids in three separate orders, I find that I am back down to 8, but still coming from three separate companies. Awesome. I decide to go home for the weekend and solve the problem of 5 missing Davids on Monday.

Monday morning, I go back to the internet. There is no company that registers having 5 Davids in the bonded marble left. I decide that if I’m already ordering from three vendors, there’s no reason not to break up the final order of 5 to two more vendors – I’m determined to have our Davids match. So I place an order for two Davids with an eBay merchant and an online shop called Decorate with Daria, Inc, both of which I call to confirm if their websites correctly indicate the number of Davids they have. Neither picks up. I can confirm, after listening to the message, that Decorate with Daria is located in the deep South. I cross my fingers.

By Wednesday, both the eBay merchant and Decorate with Daria have cancelled my orders. I’m now annoyed enough to give up my dream of a matching team of 13 Davids and compromise on the plaster Davids. The plaster Davids come from an online store called Jimmy’s Plaster Creations. Slightly dejected, I order our missing 5 Davids from Jimmy. I cannot spend any more time looking up Davids on Google Shopping.

Over the next two weeks various boxes of Davids arrive and are re-shipped to Museum Resource, who is making the crates and securing the Davids inside. With Michelangelo Public and Private just days away from opening, the atmosphere in the office hinges on frenetic. I stop paying attention to the Davids – other people open the boxes and send them on their way. Museum Resource sends over the completed Little Davids as they become ready, in sets of two and three, and as they arrive, we send them out into the world to start their adventures.

And here’s where the multiplying David phenomenon comes in. Today, the final Little Davids arrive – we should now have a full set of 13. I count, and count again. There are 15 Davids. I have no idea where the extra two came from, or even if the extra two are plaster versions or bonded marble versions, because we’ve sent so many out into the world. But that’s the truth – we now have 15 Davids. Your chance of finding one just increased.  See the Davids that have already entered the world here, and start looking for your own. Also, see here for affirmation that bonded marble was the right way to go.