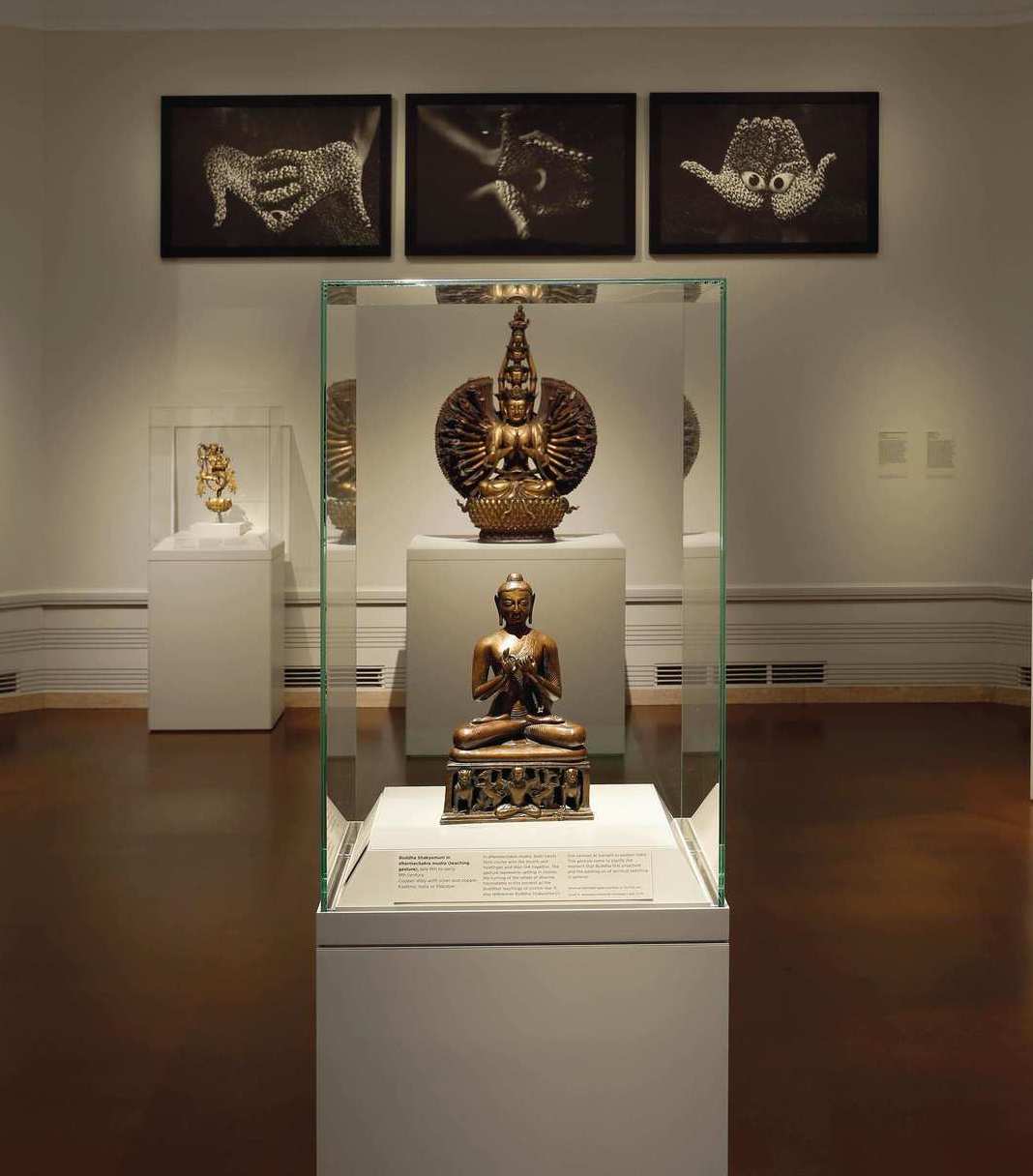 The recent renovation and expansion of the Seattle Asian Art Museum allowed SAM to evaluate and conserve artworks we have previously been unable to display. One such work is the seated Buddha Shakyamuni which is on view for the first time in over a decade. Cast in the late 8th to early 9th century in Kashmir, Buddha Shakyamuni is seated in the dharmachakra mudra, a gesture that signifies the sharing of spiritual teachings. The sculpture is one of only a few examples known in Western collections. It is featured in the inaugural exhibition Boundless: Stories of Asian Art—a thematic, rather than geographic or chronological exploration of art from the Asian continent—celebrating the historic renovation of the museum’s 1933 Art Deco building located in Seattle’s Olmsted-designed Volunteer Park.

In 2009, during a condition assessment for a multi-venue international traveling exhibition, it was discovered that large white drips of zinc hydroxychloride corrosion product were seeping down the sculpture’s back. Independent conservation scientist John Twilley had identified the corrosion product in 1988 and the object was then treated for chlorides, however corrosion had reactivated in the intervening years.

Due to the severity of the problem and the importance of the sculpture, Twilley was engaged in 2009 to perform a technical study that included, among other techniques, x-radiography and metallographic study, including electron microscopy. Twilley determined that the metal contains 34-39% zinc, which is an extraordinarily high percentage of zinc to copper even for Kashmiri production. Twilley states that “a critical technological value of 28% zinc… is believed to be the highest value normally achievable by cementation methods” (Twilley 2003: 144), in which vaporized zinc is directly absorbed by copper metal to form the alloy. This finding has great technological implications: it identified the Shakyamuni as a rare, surviving example of brass produced from the earliest actual smelting of zinc, achieved by Kashmiris approximately 1,000 years before Western Europe.

However, the sculpture’s stability is inherently compromised as a result: the presence of two phases (or different crystal microstructures of copper and zinc) in the alloy creates the potential for galvanic corrosion in the presence of chloride contamination and moisture. Above 5% relative humidity, moisture penetrates the alloy’s higher zinc component causing dissolved corrosion products to migrate through the sculpture’s porous casting network.

Conservation treatment options are limited. Chemical treatments can control chloride corrosion in copper alloys, and were tested for this sculpture and previously performed locally, but the high zinc level of Buddha Shakyamuni renders the figure particularly susceptible. Immersion of the sculpture is impractical due to the surface ornamentation and extant casting core. Therefore, controlling the environment in which the sculpture is stored and displayed remains the preferred preservation approach.

For the last decade, the sculpture has been successfully stabilized by storage at <5% relative humidity; a micro environment was fashioned from a glass bell jar packed with oxygen scavenger and silica gel, sealed to a plywood board (covered with aluminized polyethylene and nylon barrier film) on which the sculpture is mounted.

Construction of a low-oxygen, low-humidity case was required to enable display and to ensure its survival in long-term storage, as even a controlled museum environment provides ample moisture for the corrosion process to occur. A glass vitrine, rather than acrylic, was necessary to minimize the rate of air exchange. The sealed display enclosure is composed of inert materials including the 5-sided 8.8mm UltraVue laminated glass vitrine, powder-coated aluminum deck, and ample conditioning chamber located below. The case is intended to passively maintain a relative humidity below 5%, however two ports in the sub-deck are designed for dry nitrogen flushing if necessary. A glass and gasket access door in the sub-deck enables live-view of the temperature and humidity loggers inside the display area, and enables periodic replacement of the silica gel, oxygen scavenger, and temperature/relative humidity sensors.

The Seattle Asian Art Museum is thrilled for the opportunity to display the Buddha Shakyamuni, and to share both its innovative creation story and present-day preservation plan with the public. If you value the ways SAM connects art to your life, consider making a donation or becoming a member today!

This project would not have been possible without the leadership of Nicholas Dorman, Head of Conservation at the Seattle Art Museum; Mike Dunphy, Sales and Marketing Manager at SmallCorp; John Twilley, Independent Conservation Scientist; and Yadin Larochette, Museum and Conservation Liaison- Americas, Tru Vue, Inc.