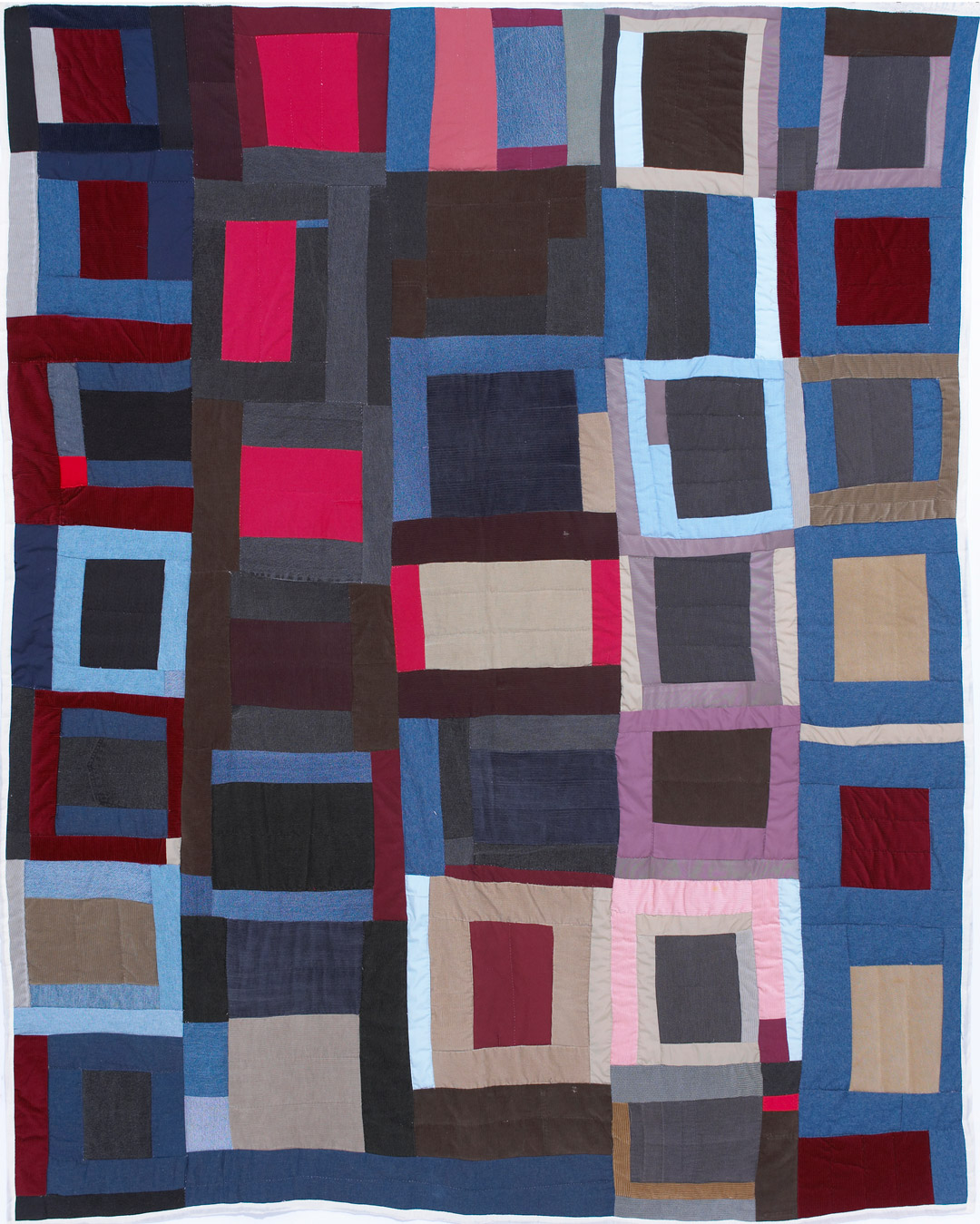 Quilt-making, as a genre, is as vast and varied as America itself, and the stories and histories embedded in each unique quilt, pieced together and often stitched by many hands, are part of what makes the craft a quintessential form of American art.

This is especially the case for the quilts of Gee’s Bend, where generations of Black women “have created hundreds of quilt masterpieces dating from the early twentieth century to the present.”1 The quilts are not bound to “traditional” techniques and results, but rather take the form of the quilt and reimagine it altogether. “Housetop,” “bricklayer,” and “my way” are just some of the many styles made by Gee’s Bend women, whose ingenuity and use of salvaged fabric, worn garments, and textile scraps have earned them international acclaim.

Boykin, Alabama, historically known as Gee’s Bend, sits at a bend of the Alabama River, framed on three sides by the natural boundary. This geographic isolation has kept the rural, Black community small—though 44 miles southwest of Selma, its current population hovers just over 250. Many still living in Boykin are the descendants of enslaved men and women who worked the fields belonging to Mark H. Pettway, who in 1845 purchased the land from Joseph Gee. Upon the abolition of slavery, many continued working for the Pettways as sharecroppers and tenant farmers—an extension of servitude, or simply slavery by another name. In the late 1930s, the Farm Security Administration, created as part of the New Deal, established Gee’s Bend Farms, Inc., a cooperative pilot project designed to support and sustain the Gee’s Bend community. The government subdivided properties, built homes, and sold tracts of land, giving its African American families control of the land they worked for the first time.2

Celebrated today for their singular aesthetic sensibility, the quilts of Gee’s Bend were born out of geographic isolation, a scarcity of materials, and a need for warmth. Yet, despite these limitations, hundreds of quilted artworks have been produced—each maker pushing the boundaries of what a quilt is and can be. Annie Mae Young is one such woman, who, in her words, “never did like the book patterns some people had,” and instead opted for quilts characterized by their larger blocks and long, meandering strips.3

Impressively, Young completed her first quilt while a child, with knowledge that was passed down through her family, from mother to daughter. She started cutting and piecing “anything [she] could find” around the age of 13 or 14, often “old dress tails and pants legs.”4 Ultimately, it was a photograph of Young in front of her 1976 Strip Medallionquilt—an iconic “work clothes” quilt featuring red, yellow, and brown corduroy stripes, and bands of denim—that catapulted Gee’s Bend quilts into the national imagination in the late 1990s.5 In 2002, the exhibition The Quilts of Gee’s Bend, organized by the Museum of Fine Arts, Houston,showcased over 60 quilts and travelled to 12 venues around the country, cementing the legacy of the community of women and their craft.

With repetition and rhythm, Blocks (2003)is visually organized in an improvisational manner with a bold palette—an exemplar of Young’s work and style. Her individuality and innovation as a quilter is evident, but the quilt also represents the community of which she was an active member, the endurance of matrilineal knowledge, and the power of collective work to breed beautiful acts.