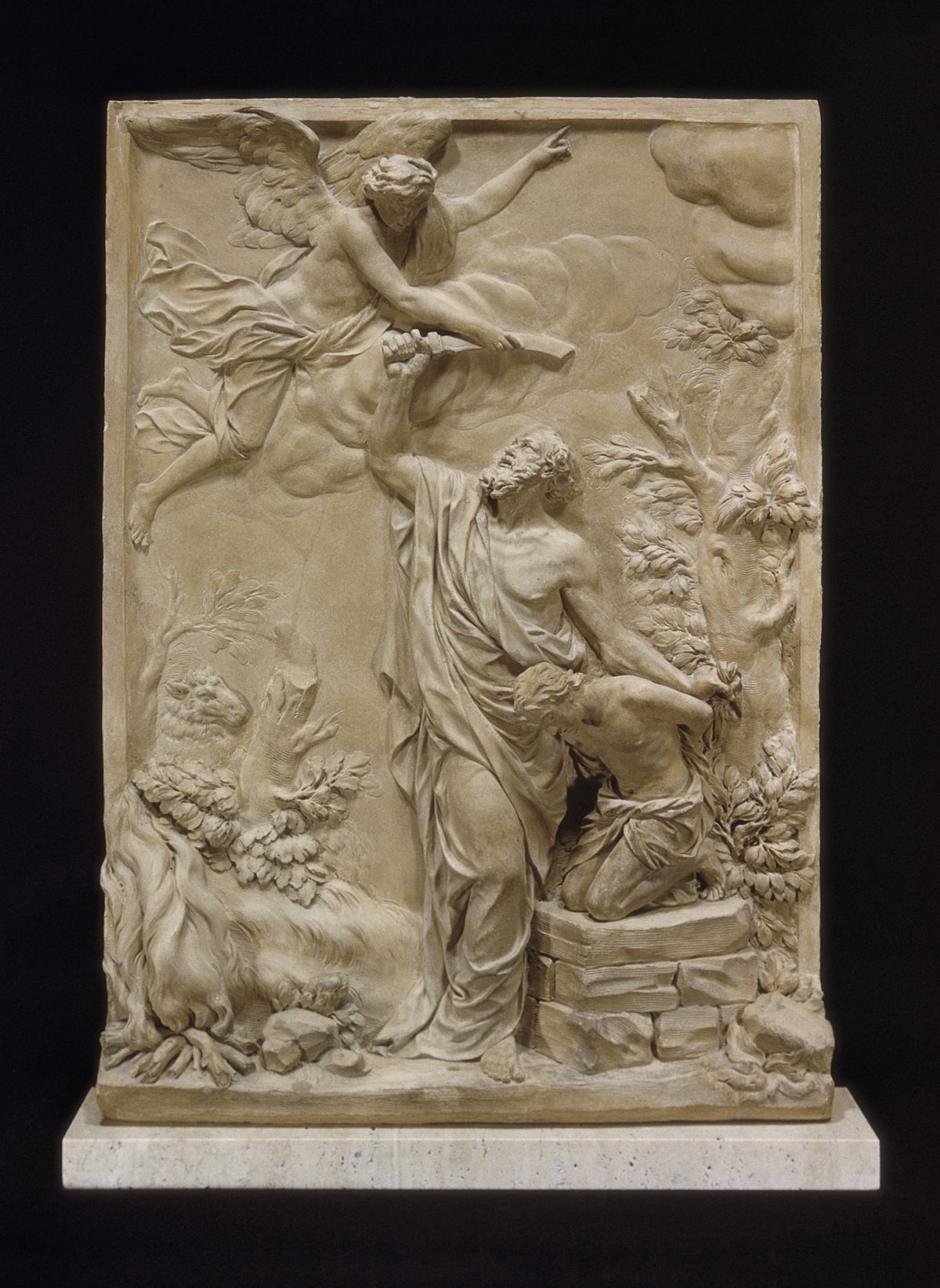 When talking about biblical studies, Rabbi Emily Meyer once said, “every translation is a commentary.” This is true, not only for verbal and written languages, but also for the language of visual art, particularly when it comes to biblical interpretation, where artistic design choices can change the context of the narrative. Alessandro Algardi’s Early Modern Italian relief sculpture, The Sacrifice of Isaac, is a prime example of how art can act as its own biblical commentary, both through image alone and in conjunction with verbal interpretation.

The Sacrifice, or Binding of Isaac narrative, is found in Genesis, the first book of Torah, also called the Hebrew Bible, chapter 22. In the chapter, Abraham is told by God to sacrifice his son Isaac, but he is stopped at the last moment by an angel, who tells Abraham he has proved his fear of God, and he instead sacrifices a nearby ram (or lamb in some interpretations).

In the original narrative, the angel calls out to Abraham as he is about to strike.1 Abraham simply responds, “Here I am.” Yet, in Algardi’s visual interpretation, the angel grabs onto the knife mid-swing, as if needing to physically halt Abraham’s actions, removing some of the sense of agency Abraham may have had in the original text; it is not Abraham’s choice to pause in his actions, but a result of forceful intervention by the angel. This compositional choice therefore acts as visual biblical commentary, adding to, and expanding upon, interpretations of the original text.

Similarly, Algardi chose to portray Isaac as an older adolescent kneeling on the altar with his head hung low, as if resigned to his fate. Much religious commentary has been written about Isaac’s age, as the story found in Torah does not mention any detail about Isaac, his thoughts, or his actions. Some interpretations portray him as an innocent young boy who is complacent and oblivious to his fate, others as a young man, aware and accepting of his fate. These varying interpretations can change the meaning of the narrative for different religious groups and are reflected in visual depictions across almost 2,000 years. Algardi’s Isaac falls closer to the “aware and accepting” interpretation. This tracks with Christian interpretations of the narrative, in which the character of Isaac is viewed as typological, a precursor or prefiguration to the sacrifice of Jesus. Considering that this object was undoubtedly made in and for a Christian setting, this compositional choice is no surprise.

It is a worthy endeavor to look at different portrayals of the Sacrifice of Isaac from across different religious groups, geographical backgrounds, and time periods to understand how the same original text may change—or maintain—meaning, representation, importance, and impact depending on its context. Each visual translation of the story, from contemporary versions like the painting by Marc Chagall, to late antique portrayals like the mosaics found in the 6th century CE Beit Alpha Synagogue in Israel and Basilical of San Vitale in Italy, truly is its own commentary.

1 10And Abraham picked up the knife to slay his son. 11The angel of the LORD called to him from heaven: “Abraham, Abraham!” And he answered, “Here I am.” 12And he said, “Do not raise your hand against the boy, or do anything to him. For now I know that you fear God, since you have not withheld your son, your favored one, from Me.” 13When Abraham looked up, his eye fell upon a ram, caught in a thicket by its horns. So Abraham went and took the ram and offered it up as a burnt offering in place of his son.” Jewish Publication Society, JPS Hebrew-English Tanakh: The Traditional Hebrew Text and the New JPS Translation, 2nd ed. (Philadelphia: Jewish Publication Society, 1999), 40.