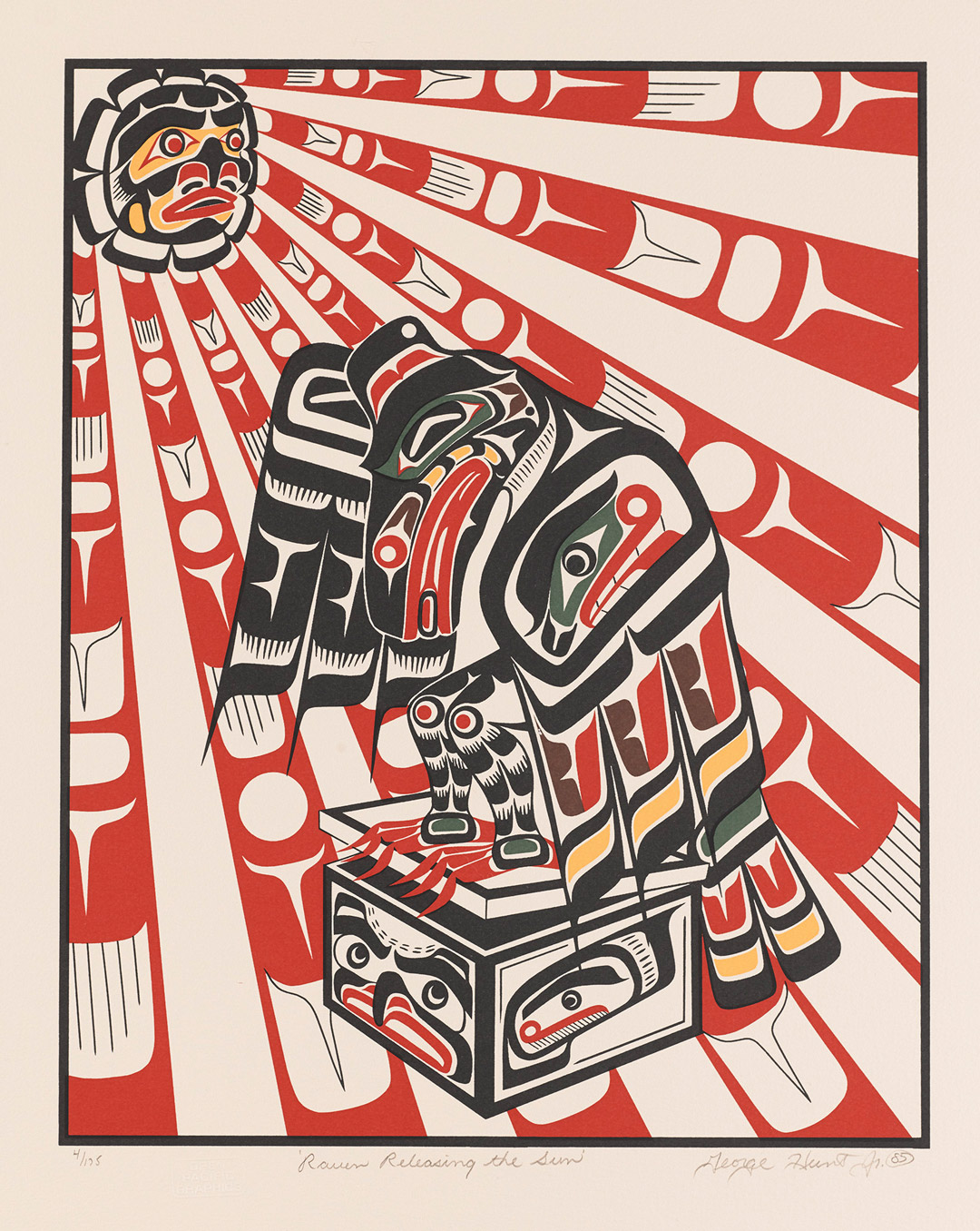 The Warmth of the Sun
Recently, we have really been feeling the heat of the sun! This wonderful and mysterious celestial body is a life-giving force and, without its presence, we would be in darkness with our companion species and without food resources. For millennium, Indigenous Peoples have understood the connectedness of humans to the forces of the land, water, and sky.

Raven, a wily trickster and culture hero, is credited with bringing humankind many important gifts to aid in their survival, like water, light (in the form of the sun, moon, and stars), and ceremony. His questionable deeds and adventures—and especially his voracious appetite—are well documented in orally transmitted stories (later written down by anthropologists) that form a corpus of oral traditions that demonstrate important teachings about Indigenous values and wisdom. These “legends” formed part of the “encyclopedia knowledge,” called hečusəda in the Lushootseed language of our region, whose teachings reveal the knowledge that humans need to live respectfully in the world, and which would be passed down through the generations.

In this famous story, the world is in darkness and humans are suffering. A great chief is the only one with light, which he keeps in his treasure box. Raven disguises himself as a hemlock needle so that the chief’s daughter would drink it and become pregnant, thereby giving the chief a beloved grandson, Raven himself, in the form of a human child. The raven-child is unrelenting in his desire for his grandfather’s treasure box and will not stop crying until he is given it. With the box safely in hand, he reverts to his raven form, flies through the house’s smoke hole, and releases the sun, moon, and stars, thus illuminating the world for all of its creatures.

In this print by George Hunt, Jr., Raven Releasing the Sun, the artist shows the crafty protagonist in the moment after he has opened the chief’s treasure box and released the first of its precious items—the sun—which the artist has depicted as a mask-like face. The rays of the sun are so formidable as to reveal themselves as bold, red tapering lines embedded with formline ovoids, U-shapes, and three-pointed “trigons”—the building block of Northwest Coast design.

George Hunt, Jr. is a part of the renowned Hunt family of artists that goes back generations to the village of Fort Rupert (Tsaxis), British Columbia.1 Descendants of the Kwaguł people, who still live there, trace their occupancy to at least 6,000 years. In 1849 the Hudson’s Bay Company opened a fort there and drew an active exchange between Indigenous People of the coast and the traders.

In the early twentieth century, famed anthropologist Franz Boas collaborated with George Hunt (1854-1933), who provided invaluable cultural material (art objects and cultural information) to Boas’s expanding exhibitions at the American Museum of Natural History, New York, and to the many volumes Boas published on the Kwakwaka’wakw (Kwakiutl). George Hunt was half Tlingit, the son of a high-ranking chief’s daughter, Mary Ebbetts Hunt (Anislaga) from Klukwan, Alaska, and an English fur trader. He was born in Fort Rupert in 1854 and deeply enmeshed in Kwaguł art, culture, and ceremony. George Hunt, Jr, the artist of this print, is a directly connected to this lineage. He is a well-known carver and painter, like his relatives Mungo Martin, Henry Hunt, and Tony Hunt. Interestingly, his native name Nas-u-niz means “Light Beyond the World.” This story of Raven was likely brought to the Hunt family by George’s great-great-grandmother, Mary Ebbetts Hunt, herself an accomplished weaver.2

“Many depictions of this story show Raven with the Sun in his mouth representing the stealing of the Sun. I was trying to showcase a bit of drama . . . The climax of the story is after Raven has released the sun and the moon and has opened his grandfather’s final precious box, which contained the stars. In this design I am imagining Raven in a panicked state of escape—transforming from human form to raven form and holding on to as many stars as he can while trying to escape the clan house.”  – Rico Worl

2 See a Chilkat Robe woven by Mary Ebbetts Hunt (1823-1919) in the collection of the Honolulu Museum of Art: blog.honoluluacademy.org/verifying-the-artist-of-a-very-special-chilkat-robe/