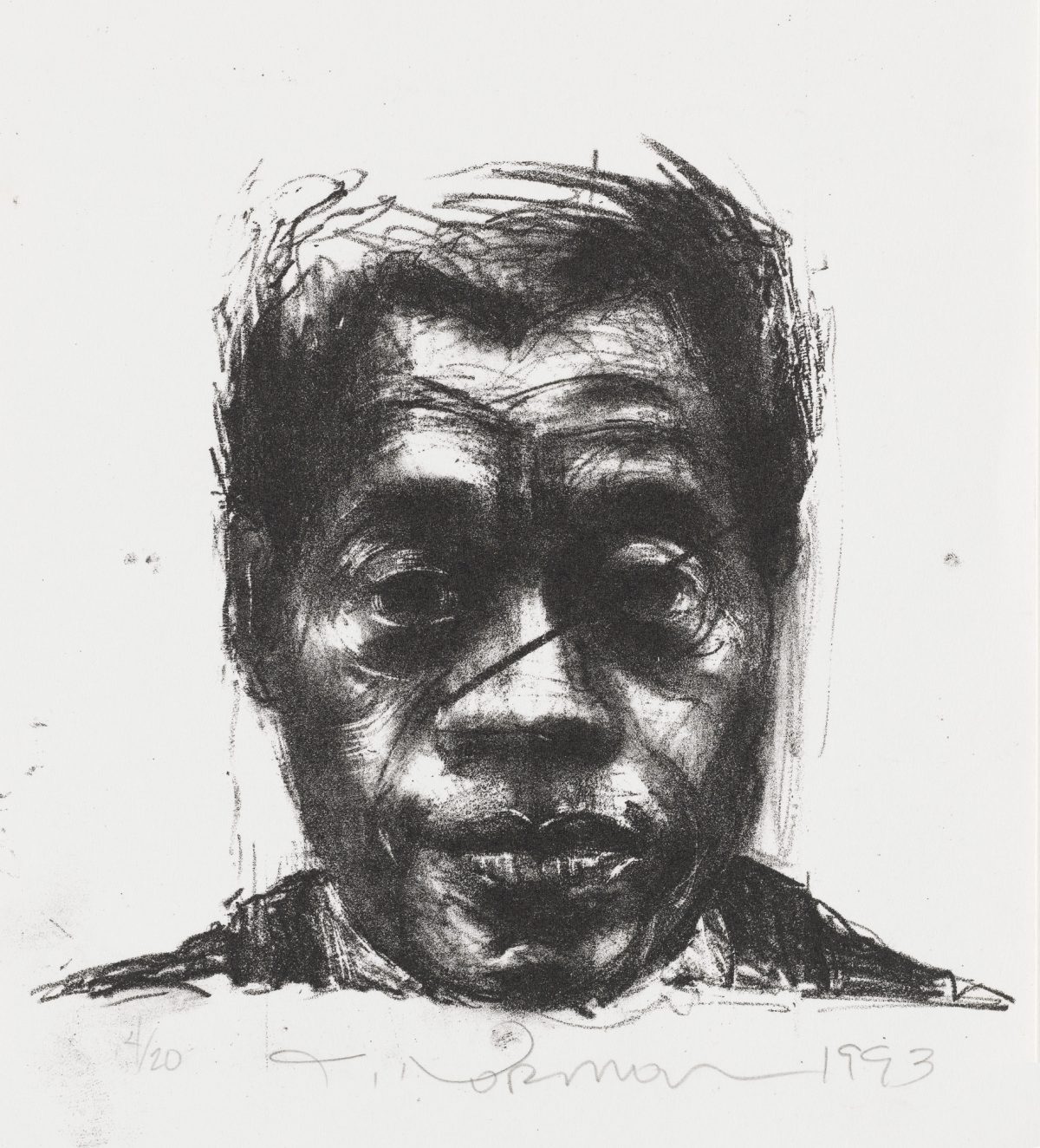 Last month, inaugural poet Amanda Gorman captured the country’s attention with the performance of her poem “The Hill We Climb” at the Presidential inauguration, speaking of our country’s fractured history and hopes for its future:

“…being American is more than / a pride we inherit, / it’s the past we step into / and how we repair it.”

In her words I’m reminded of those of another great American writer, which echo just as loudly now as they did over 60 years ago:

If history is intractably part of the present, then how do we move forward? In Joseph Norman’s 1993 portrait of poet, essayist, novelist, and activist James Baldwin, history gazes directly out at the viewer. Made just five years after the influential writer’s death, Norman portrays him not as the larger-than-life figure he had become, but in an intimate and personal portrait. Baldwin faces straight ahead, his eyes aligned with our own, in direct confrontation—or perhaps conversation—with us as viewers. This perspective is one that Norman also employed in his Notorious series (examples of which are also in SAM’s collection), in which he asks viewers to read the humanity in the eyes of young Chicago gang leaders. “You do in a sense have pity on those boys,” the artist noted, “because you are looking directly into their eyes, and you see emptiness at times. You see that these are children.”

Norman imbues Baldwin’s iconic visage with this same sense of humanity and personal connection with the viewer. Stylistically, Norman eschews the sharpness of a photographic image and renders Baldwin in a darkly shaded and richly textured manner. With the seemingly unfinished upper left quadrant and thick diagonal line crossing Baldwin’s nose and eye, it reads more like a sketch than a finished portrait. Of his own work, Norman said: “The work has to have veracity, otherwise it is fantasy. So the type of work that I make is poetic realism.”[1]

Poetic realism, indeed. What could be more real than the weighty gaze of history confronting us in the present, or more poetic than the suggestion of work still left to be done?

Norman titled the series that includes James Baldwin and other portraits of Black cultural icons, “The Last Poets.” But Baldwin himself had something to say about the idea of being the last of anything, as he wrote to his nephew, James, offering advice for the future:

“Great men have done great things here, and will again, and we can make America what America must become. It will be hard, James, but you come from sturdy peasant stock… You come from a long line of great poets, some of the greatest poets since Homer. One of them said, The very time I thought I was lost, My dungeon shook and my chains fell off.[2]

And, in the words of the latest in that long line of great poets:

“For while we have our eyes on the future, / history has its eyes on us.”

With the eyes of history gazing out at us, may we all have the courage and wisdom of poets past and present to move towards that unknown future.

[1] https://www.youtube.com/watch?v=A7el32Hd74w
[2] James Baldwin, “My Dungeon Shook: Letter to My Nephew on the One-Hundredth Anniversary of the Emancipation,” in The Fire Next Time (New York: Dial Press, 1963).