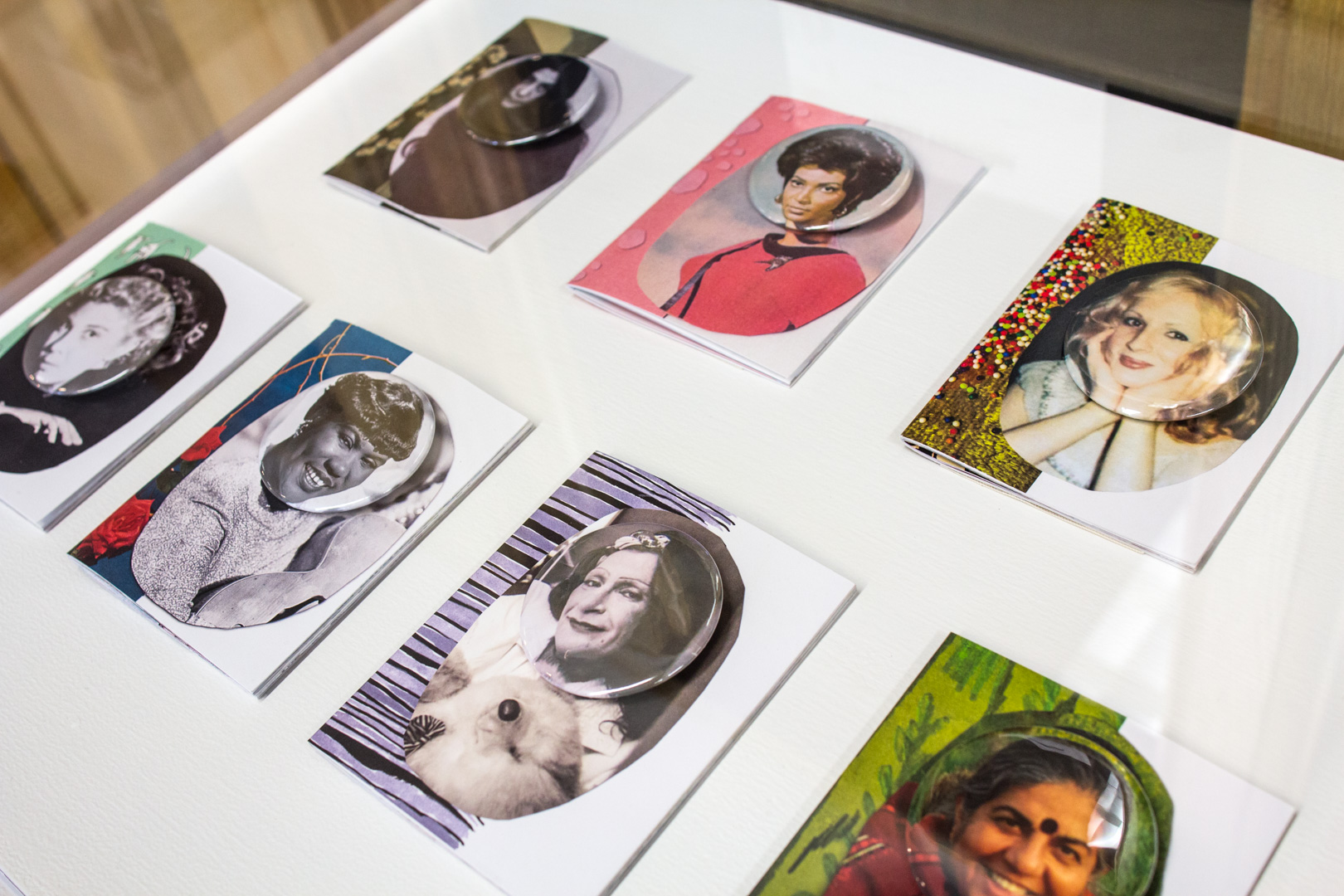 The Dorothy Stimson Bullitt Library at the Seattle Art Museum has been quietly developing a book arts collection for the last two years. Materials in this collection include artists’ books, zines, one-of-a-kind books, and other rarities. With a scope focused on works created by artists in SAM’s collection, works related to an exhibition at SAM, or works that reference art or artists generally, the Book Arts Collection has grown to nearly 90 titles.

Currently, we are featuring work by women book artists and zine creators from this collection in the Bullitt Library and you can visit this installation through October 6. The works include a serial zine focused on women, a tunnel book, an accordion book with floating panels, a mini carousel book, and limited edition exhibition catalogue in a box. The Hey Lady zine series (2015– ) is produced by Northwest artist, Regina Schilling. She selects a female subject for each issue and invites women artists worldwide to contribute portraits. It began with Yoko Ono and sixteen friends, and quickly expanded to include the work of hundreds of artists internationally, a focus on crucial women in various fields, and exhibits around the country.

“Women are truly invisible in this world. The purpose of Hey Lady, and of all my work, is to lift the cloak of invisibility and say we are here, we have always been here, and we’re here for each other. I want women to experience a creative outlet that is nurtured, validated and celebrated, for Hey Lady to be a place where people can be a part of something good, and to celebrate women who have done such an incredible job at being humans.”
— Regina Schilling A view of the Piazza San Marco in Venice is one of Boston book and paper artist, Laura Davidson‘s, “favorite views” that she incorporates in an ongoing series of tunnel books. Other books in the series include Florence and Paris, as well as her hometown baseball stadium, Fenway Park, and a view of Boston’s “Big Dig.” Unlike the summertime tourist-laden Venetian square, Davidson’s Venice: Piazza San Marco (2010) view of the Basilica di San Marco and the Campanile is tranquil and allows us to look upon a peaceful setting through Venetian Gothic windows.

As evidenced in the recent exhibition, Seeing Nature, views of Venice have inspired a number of artists, like Claude Monet, Edward Manet, Thomas Moran, Joseph Mallord William Turner, and others. Davidson’s work reminds us of two paintings in SAM’s collection which feature views of Venice: The Doge’s Palace and the Grand Canal, Venice (ca. 1710) by Luca Carlevariis and The Riva degli Schavoni, Looking West (ca. 1735) by the Studio of Canaletto. Davidson’s book is yet another inspiring take on a beautiful city. Possession is Nine-Tenths: Historical Detritus of Syria (Volume I)

“Who owns what is a major point of discussion between countries liberated of their historical wealth and the public and private collectors, as well as museums, that house (and protect) them. Without such plundering, many artifacts may have been lost or destroyed, as evidenced by the actions of ISIS at Nimrud and years ago, the Taliban at Bamiyan. [The items found in the work are] part of HK’s private collection: restrung ancient beads, a tile from the emperor’s feasting hall representing Justice found in Shahbah, a pottery shard without provenance, a small clay tablet without provenance.”
— Elsi Vassdal Ellis Centered (2008) is a mini carousel book created by book artist, Maria G. Pisano under her imprint Memory Press. The work incorporates three pop-ups, and is hand cut to reveal colorful, intricate designs inside. For this work, Pisano—who is Italian—focused on the pottery traditions of Deruta, a town in the province of Perugia in the Umbria region of central Italy. Deruta is known for ceramics—≠especially its maiolica pottery industry.

Pisano’s work is reminiscent of the maiolica in SAM’s collection, much of which can be found in the Italian Room. Enhanced color decoration is a hallmark of maiolica pottery: blues, greens, yellows, oranges, white, black, and brown, as well as tones of luster colors such as ruby red, pink, yellow, and reddish brown were developed as early as the 15th century. Colors similar to these are readily apparent in Pisano’s intricate work. Conceptual artist, Yoko Ono, designed this limited edition exhibition catalogue in a box, Imagine Peace: Featuring John & Yoko’s Year of Peace (2007), for an exhibition organized by the Emily Davis Gallery/Mary Schiller Myers School of Art at the University of Akron. Varying greatly from the standard bound exhibition catalogue, this version includes a rubber stamp, button, small flashlight, instruction card, and various postcards stating “War Is Over,” “i ii iii I Love You,” and “Spread Peace” all in a white box with black lettering: “Imagine Peace.” The exhibition focused on the thematic ideals of peace and love, and followed the work of Yoko Ono and John Lennon chronologically as solo artists, as a couple in the 1960s, and also included Ono’s recent solo works.

To get a closer look at these works, or other works in our Book Arts Collection, make an appointment to visit the Bullitt Library. Appointments typically take place Monday–Friday 10 am–4 pm.