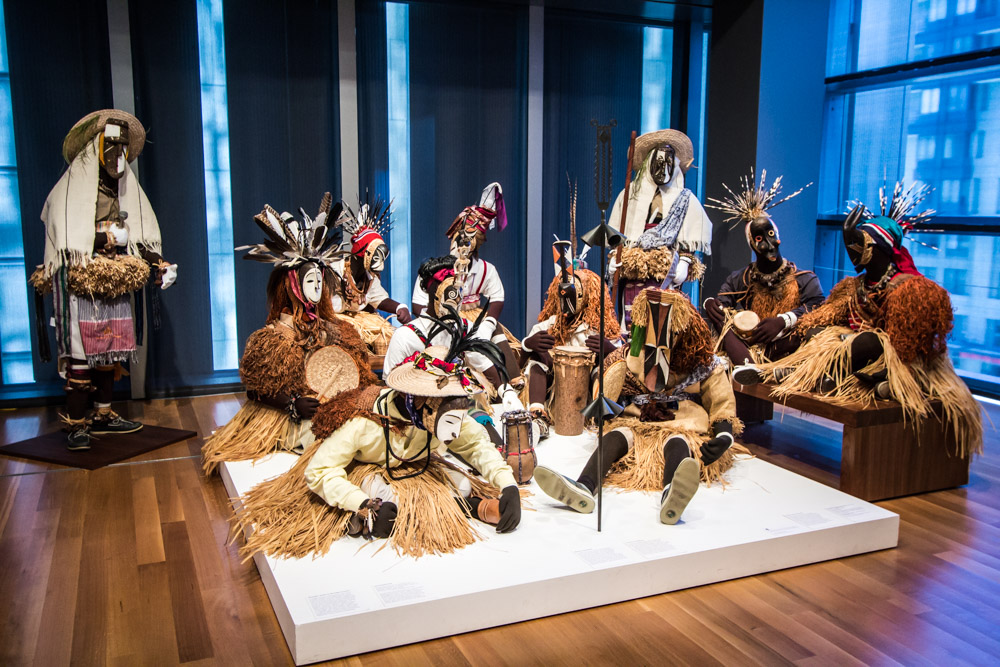 Throughout the 20th century, vast collections of African masks made their way into foreign lands and are now on display as the heads of missing bodies. Masks are constantly seen in museums and galleries, on eBay, and at sidewalk sales. In this dislocated state, African masks have sometimes found themselves cast in roles that are shockingly counter to their original intent.

One example is Pablo Picasso’s work Les Demoiselles d’Avignon (1907; Museum of Modern Art, New York), a painting lauded as one of the catalysts in 20th-century art. Pablo Picasso’s decision to take the features of African masks and place them on two naked women was revolutionary, the first step in the radical transformation of space and volume that would become Cubism.

One wonders what would have happened if Picasso hadn’t separated the masks from the masquerade. What if, instead, a full masquerade had come to Paris? For the sake of speculation, let’s imagine the visit of a Dan masquerader from the Ivory Coast, known as a Ge, whose masks were common in French collections. Drummers and singers would escort the Ge masquerader as he moved quickly through the streets to Picasso’s studio. He would have donned a massive costume of raffia grasses, feathers, and fur accents to underscore that he was not from any normal human realm but from the sacred forests. Bells and drums, shouts and songs would contribute to the blur of fast-moving activity that halted in front of the artist’s door.

Pounding to be let in, the Ge would speak in a grave and distorted voice, while a translator would shout a demand to open the door. Picasso would be pushed aside as the Ge entered the room, and pandemonium would break out as African eyes beheld masks like their own were depicted atop the naked bodies of two women with pale skin.

With outrage and confusion spreading, everyone would turn to gauge the reaction of the Ge, the supreme authority. He would stop and stare, then order everyone except Picasso and the translator to leave the studio. The Ge would then sit on the group and gesture for Picasso to sit nearby as he explained a few things.

First: no mask was ever to be worn by a woman, and most definitely not a naked woman in the middle of a room with other naked women. Defying all proper behavior, this breach of etiquette required immediate correction, so songs and offerings for women would be prescribed.

The Ge would ask Picasso why he put masks on such women and who they were. Picasso might bring up difficulties with the women in his life, and how he’d been looking at pictures of masks in books and at a museum, then had collected a postcard of naked women from a place called Dahomey, marveling at their sleek bodies but also worrying about the diseases circulating in the bordellos of Paris.

In response, the Ge might offer practical advice about how to manage relationships and to seek alliances with spirits that would inspire joy instead of dark fears. He could also explain that masks were not to be bought and sold; instead, they were intended to initiate visitations from beings who would emerge from the forests to contribute their wisdom in times of confusion.
Days and weeks might pass as the Ge transferred aspects from the system of thought from the Côte d’Ivoire. It was his role to teach younger men ways to operate in the world, and he would have found Picasso’s troubled mind in need of adjustment. To alleviate some of the artist’s perplexity about life, the Ge would recommend that he consider attending a school convened in the forest, where he would learn about his responsibilities as a young man, how to survive in difficult circumstances, what it takes to manage a family, when and how to show respect for women, the practical skills of life, and all about the art of performance as a means to express visions of human aspiration. Picasso would be offered a chance to immerse himself in a masquerade that was a school, a system, and an overriding ideal.

Instead of this full-bodied experience, Picasso invented his own approach to African masks and sculptures. Masks became heads without any voice or body. They became voiceless ambassadors, who were often cast as characters in other’s artistic fantasies.

Admittedly, exporting an entire masquerade is difficult and can be inappropriate at times. Masquerades are intensely local, requiring special staging developed within communities that invest massive time and effort in them, often in deepest secrecy. They rely on collaborations among a multitude of talented artists who devote their creativity to performers whose identities are concealed, and transporting this cast and crew is not easy.

Artists today in the United States and across the globe are working with new interpretations of disguises that play out in creative ways. They are using digital mediums to bring masquerades into places where they have never been before, and creating new meanings as they empower new actors—such as women—to participate. They adapt iconography from multiple cultures and influences, weaving together inspiration from their family’s varied histories, the far-flung cities and rural areas in which they’ve lived, and artistic traditions from across the globe.

It’s a heady mixture of inspiring havoc. It’s a moving, whirling parade that invites us to respond—to take up or take off our own daily disguises and participate.

This is an edited excerpt of the essay, “Meet Me Where the Masks Are Alive and the Spirits Roam Free,” written by Pamela McClusky, Curator of African and Oceanic Art for the Seattle Art Museum. The essay is included in the exhibition guide, Disguise: Masks & Global African Art.

Disguise: Masks & Global African Art is on view at the Seattle Art Museum. See this dynamic unfixed exhibition before it departs for the Fowler Museum at UCLA in Los Angeles on September 7.