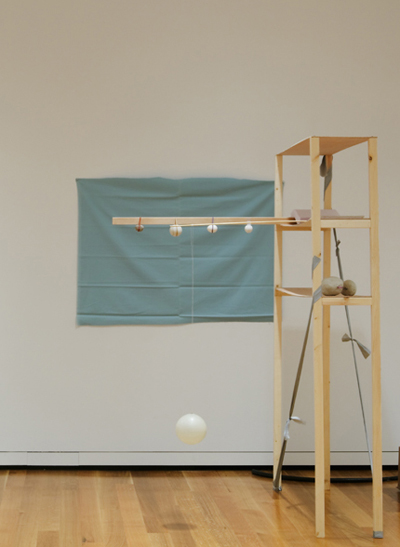 The SAM Next Heide Hinrichs installation Borrowed tails closes this Sunday. In conjunction with the closing we wanted to publish a conversation between the exhibition curator, Marisa Sanchez, Assistant Curator of Modern and Contemporary Art and the artist Heide Hinrichs.

Marisa C. Sanchez (MS): Your Regal/Shelf (2009) in Borrowed tails has become the cornerstone of the installation. Meaning, all of the other works in your installation are born out of or evolve from the shelf. I find myself returning to it with questions and for answers, discovering new meanings in each subsequent encounter.

Because of the logic of this structure and its component parts, including the blue fabric “window”, the notebook paper, clay balls, and the wood. I wonder: when you were making the sculptures and drawings for this installation were you aware of how the shelf would function in the gallery alongside the other works? Did you anticipate this object would take on such a central role?

Heide Hinrichs (HH): No I didn’t anticipate that. Though the shelf contains some of the earliest pieces of the show, and it’s structure was the last to be finished. The two sticks coming out to the side, one holds a hanging white ball and the other has four, different elements attached to it were first assembled on a bookshelf at my home and held in place by a stack of books. That was the beginning of the shelf and the rest developed with the other parts of the show. Figuring out how to build the structure of the shelf took longest, as it was not going to serve the purpose of a functional shelf. Instead, it is in a way a display case. It is much more a pedestal disguised as an idea of a shelf.

MS: Your answer brings to mind the specific ways in which we talk about your objects. As with the shelf, we describe the object as it is….a shelf, with objects placed on it. The shelf remains what it always is—a structure that holds things. Yet, it is also something else. A sculpture, an image, a language. It’s this visual space in your work that I find exciting. As a viewer, we are never not aware of the materials (a box, a soccer ball, wood, cardboard), but you encourage us to see the potential of the materials to change their shape or function. Would you agree?

HH: My interest is to challenge our preconception as much as it is to question the coherence of the materials I work with. Deciding to include all of the pieces under the title Borrowed tails reflects the idea to play with the “in-between” space, the space we usually describe as empty. At the museum, I tried to create a room that balances the void and the material without language separating it into different entities.

MS: There are sculptures in the exhibition that have more illusionistic titles, such as Stars Withdrew from the Sky and The Third Clown. What led you to title some objects and not others?

HH: The titles have their origin in the history of the specific pieces. Stars Withdrew from the Sky, for example, was inspired by a piece of Roni Horn in which she places this text, a quote by Emily Dickinson, on a leaning aluminum stick. On the one hand, you can understand the work as a follow up to Roni Horn’s piece, but at the same time you can recognize a principle in it that reoccurs in a couple of other objects in Borrowed tails: a broken surface, where materials are embedded into each other, suggesting a moment of transition, a movement stopped in time. For example, this happens with the pearls in the cardboard box, the pencils and eggs that reach through the surface of the table or the clay objects on the shelf. MS: You mention Roni Horn’s sculpture having influenced your thinking when creating Stars Withdrew from the Sky. When I experience your work there are these wonderful echoes that I sense of artists, who you share a kinship with, including Richard Tuttle, Eva Hesse, Mark Manders, Robert Morris, among others. Most recently, an artist remarked to me that he sees Paul Klee in your sculptures and it was like seeing a Klee line drawing articulated in three-dimensions. Can you talk more about your influences?

HH: Interestingly, two years ago, I started to get very involved with Paul Thek’s work, an artist who you might not think of as relating to my practice. Artists who are important in certain moments take on different roles, they turn into a personage with whom you discuss a specific question, which you experience in their work and that is relevant to you. Alighiero Boetti for example is someone with whom I “kept in touch” when I was working on the soccer ball pieces (Rose belongs to Lotus/Rikki’s shown at Howard House in 2009).

In a bigger picture, Ulrike Grossarth, with whom I studied eight years ago was an important influence. She is a German artist who started her career as a dancer and moved on into the field of performance and installation. In the eighties, she was involved into an off-shot of Beuys’ Free University. As a student in her class, you were confronted with ideas that challenged the traditional conception of fine arts and culture in a broad sense.

That understanding was then challenged when I moved to Antwerp, Belgium, where I felt that I was suddenly exposed and surrounded by an approach and artistic practice that was highly subjective, emotional and sensual, which I experienced as very refreshing and somehow liberating. Both of these worlds are still important to me and I believe they have allowed me to develop a poetic language (that might be read as a transformation of something as delicate as a work of Paul Klee.)

MS: I hadn’t known of Ulrike Grossarth until I began working with you on your SAM Next show. You had suggested I take a look at her work. In doing so, it was great to understand how her work has been an important influence on your installation-based practice. As a graduate student you also integrated performance into a few of your installations. These days, are you developing any works that bring a performative element into them?

HH: Yes, I did. The last work that included a video of a performance  happened in 2006 The Clown, the Librarian and the Astronomer: Part One. In this video, I am dancing in a clown costume, looking a bit like a monkey or another animal as I move, as if I would be in a restricted space with a very low ceiling. This video was then projected inside of a box that functioned at the same time as a pedestal.  Part two (the Librarian) and three (the Astronomer) are not yet completed. I expect the one regarding the librarian will include a performative aspect. I am partly working on that right now. Nevertheless, the body itself was present in other works since then, like hands, arms and teeth made out of rubber, clay or papier-mâché.

MS: You recently moved into a new studio and on a recent visit I became interested in several of the sculptures and wall drawings, which are primarily made of fabric that you have developed since your most recent body of work was completed for Borrowed tails. I am intrigued by the way you compose materials, producing images that open up a number of associations, often related to the built environment. I’m thinking of the work with the hand-molded bricks as well as the circular structure formed by a single piece of fabric, which is collapsed onto the ground. You are not only shaping material, but you are shaping space—the empty space around or between object. With this in mind, are there certain architectural forms that inform the “imagery” or forms in your work? HH: The two objects you mention are connected to my thinking about the different layers of spaces we build around us, different layers like the skin of the body as our first house, the clothes as a second one, and a house as the third, the literal architecture. Each of these layers create different spaces of intimacy and being. Apart from that there is one particular form, the tent, which is a structure that features a lot of aspects that I return to in my work. The tent as a nomadic shelter for living has this certain temporality and is made up of materials that can easily collapse. Aside from this idea, I am thinking a lot about the idea of a library, an archive—the condensed accumulation of information, sources, and their accessibility, but also the power the archive has in shaping cultural understandings and values.