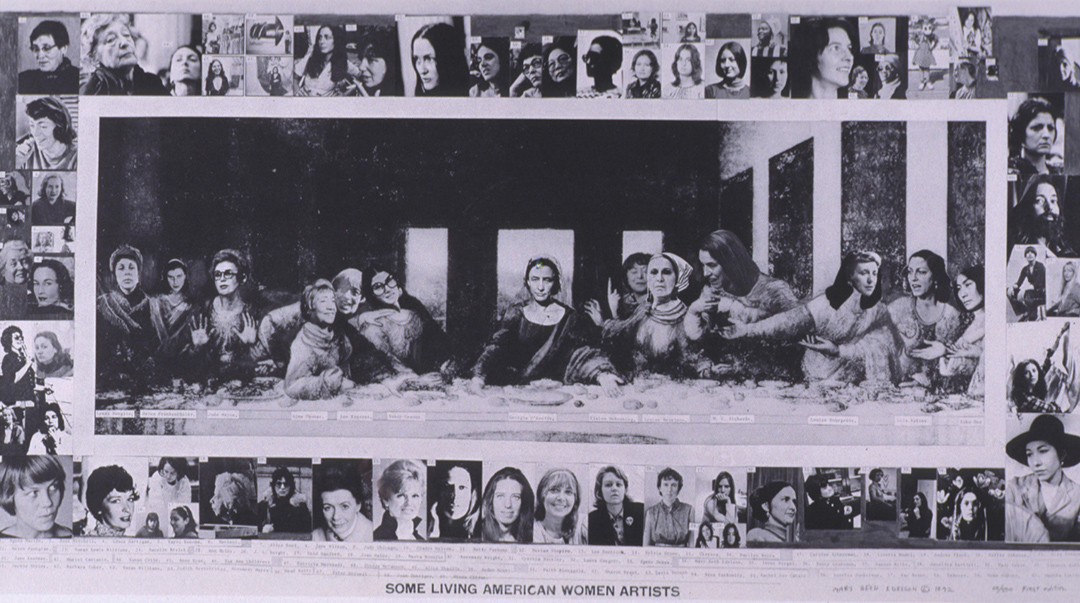 In recognition of International Women’s Day, as well as Women’s History Month, this week we look at Mary Beth Edelson’s Some Living American Women Artists/Last Supper. Printed during a historic decade of feminist activity, this 1972 lithograph takes Leonardo da Vinci’s iconic Last Supper and replaces the biblical male figures with contemporary female artists. Jesus, represented instead as Georgia O’Keeffe, sits at the center of the (literal and proverbial) table alongside a number of other pioneering women artists: Miriam Schapiro, Hannah Wilke, Yoko Ono, Faith Ringgold, Lee Bontecou, Eleanor Antin, Agnes Martin, Lee Krasner, Carolee Schneeman, Lynda Benglis, Alice Neel—the list goes on. In the spirit of this feminist work, one that gives representation to an international and overlooked roster of women, below are four quotes from four generations of feminist writers, philosophers, and activists: Simone de Beauvoir (1908-1986), Luce Irigaray (b. 1930), bell hooks (b. 1952), and Chimamanda Ngozi Adichie (b. 1977).

To emancipate woman is to refuse to confine her to the relations she bears to man, not to deny them to her; let her have her independent existence and she will continue nonetheless to exist for him also: mutually recognising each other as subject, each will yet remain for the other an other. The reciprocity of their relations will not do away with the miracles—desire, possession, love, dream, adventure—worked by the division of human beings into two separate categories; and the words that move us—giving, conquering, uniting—will not lose their meaning. On the contrary, when we abolish the slavery of half of humanity, together with the whole system of hypocrisy that it implies, then the ‘division’ of humanity will reveal its genuine significance and the human couple will find its true form.

How can I say it? That we are women from the start. That we don’t have to be turned into women by them, labeled by them, made holy and profaned by them. That that has always already happened, without their efforts. And that their history, their stories, constitute the locus of our displacement. It’s not that we have a territory of our own; but their fatherland, family, home, discourse, imprison us in enclosed spaces where we cannot keep on moving, living, as ourselves. Their properties are our exile.

Visionary feminism is a wise and loving politics. It is rooted in the love of male and female being, refusing to privilege one over the other. The soul of feminist politics is the commitment to ending patriarchal domination of women and men, girls and boys. Love cannot exist in any relationship that is based on domination and coercion. Males cannot love themselves in patriarchal culture if their very self-definition relies on submission to patriarchal rules. When men embrace feminist thinking and practice, which emphasizes the value of mutual growth and self-actualization in all relationships, their emotional well-being will be enhanced. A genuine feminist politics always brings us from bondage to freedom, from lovelessness to loving.

– bell hooks, Feminism Is For Everybody: Passionate Politics, 2000[3]

Some people ask: “Why the word feminist? Why not just say you are a believer in human rights, or something like that?” Because that would be dishonest. Feminism is, of course, part of human rights in general—but to choose to use the vague expression human rights is to deny the specific and particular problem of gender. It would be a way of pretending that it was not women who have, for centuries, been excluded. It would be a way of denying that the problem of gender targets women.